With a variety of VPN services to choose from, there is at least one that stands out for its unique approach to user traffic distribution. We are talking about Hola VPN, which is an Israel-based provider of virtual private network services. But the structure of its virtual network is entirely different from what other providers offer.

This approach is to innovate and disrupt the marker and as expected might be seen as controversial by some people, though the fact that millions use Hola stands for itself. On the one hand, it allows you to take advantage of a massive virtual network for free.

On the other hand, in exchange for this, you have to share your bandwidth with other users. With that being said, if you don’t want anyone to use your computing power, you can upgrade to the paid version of the software – Hola VPN Plus.

The unusual structure of the network poses some questions. Is Hola VPN safe? Is it faster or slower than other VPNs? Does it provide a stable connection? Does it suit for torrenting and streaming? Look for the answers in our Hola VPN review.

What Do You Get with Hola VPN?

Pros:
Cons:
As expected from a disruptive market product, you gain a lot, but things are not always what you expect them to be.

On the one hand, it provides you with unlimited free access to an anonymous network with a possibility to upgrade to the premium version and establish up to 10 connections simultaneously. On the other hand, it uses your resources by routing other users’ traffic through your computer. It may slow down your system (depending on your setup), though there is no noticeable real impact.

Hola VPN uses a small fraction of your available Internet (less than the average youtube clip a day), and you share only when your device is idle and while you are not using it. The free Hola VPN does not promise complete security and privacy, and it should not be used for that purpose.

The headquarters of Hola VPN is located in Israel – the country, which is currently out of the reach of the Five Eyes Alliance. That is not bad in terms of security. The particular number of its server is unknown, as it depends on the number of its active uses. But the Hola’s community is huge, and it continues to grow, so you can route your traffic through almost any region of the world, which is great for unlocking geo-restricted content.

A definite advantage of Hola VPN is the support of up to 10 simultaneous connections. It is compatible with all popular platforms, which means you can use it simultaneously on your Windows, Mac, and Linux computers, as well as on Android and iOS devices. It makes Hola VPN a flexible and convenient solution.

On top of this, Hola offers free extensions for popular web-browsers, such as Hola VPN Firefox and Hola VPN for Chrome and Opera. They allow browsing the Web anonymously by changing the IP-address. It’s convenient when you need to unlock certain websites without using a VPN client for the entire system.

The Hola VPN free edition is an unblocker and does not provide any security features. Though all proxied traffic and control is done over a secure SSL tunnel, not all your traffic is routed through it as it works as a proxy, routing the user traffic through remote servers, which allows hiding the real IP for accessing any sites in various countries.

The paid version has the features of a real VPN. Hola VPN uses IKEv2/IPSEC with AES 256-bit encryption, which complies with the industry’s modern standards. It means the Hola VPN provides a high level of security while Hola free VPN proxy is enough for removing geo-restrictions.

The issue of keeping user logs is another point of concern. Usually, when we are using a VPN, we don’t want anybody to track us. But in the case with Hola, all the traffic passes the users’ computers, and keeping logs can be just a protective measure in this context. If a scammer or a cybercriminal uses your PC for making something illegal, your IP automatically falls under a cloud of suspicion.

And still, when it comes to privacy, Hola VPN is not the best choice. Though they claim that logs are collected the purpose of improving its service, crime prevention, and network abuse prevention, the very idea of tracking your activities might bother the privacy-savvy users.

Because of the specific structure of the Peer-to-Peer network, its performance is a sort of inconsistent. Speed test results vary significantly depending on the location chosen, but in general, they are quite acceptable though not great.

We tested the connection speed using the SpeedTest tool. For European servers, the average result is in the range of 50-59 Mbps, which is quite encouraging. The speed decreases when you connect a US server: the average figures that we managed to get were lower than 50 Mbps – somewhere in the range of 42-46 Mbps. And still, this is not bad; at least, we didn’t experience any difficulties with streaming video.

Getting access to otherwise unavailable content is one of the primary reasons why people use VPNs. The most popular ways of getting content are file sharing via torrent sites and direct online streaming from individual repositories, such as Netflix.

Unfortunately, Hola VPN doesn’t allow torrenting. It means you can\t use it for file sharing. But it is a useful tool for unlocking access to Netflix and other popular services. In particular, according to the provider’s claims, the list of the supported streaming platforms includes all the giants, such as Netflix, Hulu, Amazon, BBC, HBO, and YouTube.

A common problem of many VPN services is that they fail to unlock Netflix in the USA. In our tests, Hola VPN managed to remove the geographical restriction quite effectively. By choosing appropriate servers, we succeeded in opening Netflix in the following countries: the US, the UK, Canada, Japan, France, Germany, Poland, Netherlands, Russia, and Italy.

How Much Does Hola VPN Cost?

Probably, the strongest selling point of Hola VPN is the availability of a full-featured free version. Unlike other providers, Hola doesn’t set any speed or bandwidth limits. You can utilize the whole vast network for absolutely no money. The only price for it is sharing a small fraction of your idle resources with any users. If this price is unacceptable for you, then you have to switch to the premium version and enjoy higher security. 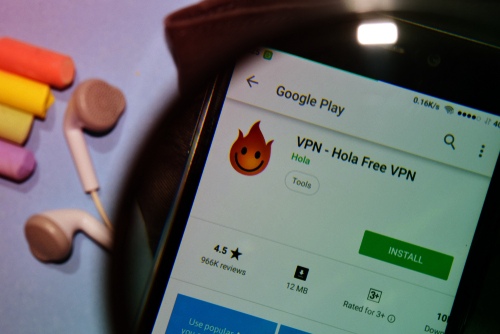 Hola has a paid version for users who don’t want to share their idle resources or require full security. The initial cost of Hola VPN Plus is $11.95 per month, which is comparable with the pricing of top VPN providers. Of course, there is an opportunity of buying the product at a reduced price if you opt for an annual or a bi-annual plan:

The cost of the 3-year plan seems lucrative, but it is available only in the framework of a temporary special offer. Also, before purchasing a large pack, a user wants to be convinced the product suits him. Though Hola VPN Plus doesn’t have a trial period, it has a money back guarantee 30 days, which is not bad.

Ease of Use and Customer Support

Hola VPN is as easy to use as any VPN service. The setup time doesn’t exceed 5 minutes, no matter whether you are installing a Hola VPN extension or a client for Windows. The interface is pretty simple and straightforward. With 1-2 clicks, you get access to all the information: you can see the list of servers of Hola VPN, change country, and check the current status.

A strong point of Hola is its massive community. As of today, it has reached over 180 million users in 190 countries of the world. Hola can’t be used only in North Korea. The product is reviewed and discussed on numerous specialized forums, so finding answers to the questions regarding its features is not a problem.

Besides, Hola offers a good knowledge base; it also can be of use for those looking for detailed information about the logging policy, encryption standards supported, etc. Finally, it has its customer support. Unfortunately, there is no live chat option. But you can contact the support service via email.

Do We Recommend Hola VPN?

It’s hard to give any particular recommendations about Hola, as the product is different from the other VPN vendors in the market. In our Hola VPN review, we tried to single out its strong and weak points. Let’s sum it up:

As for the premium version, it provides a better level of privacy, but it is not cheap. Hola VPN is priced at almost $12 per month, similar to industry’s leaders, such as Nord VPN or ExpressVPN. One of the reasons to use the paid product from Hola is the support of ten simultaneous connections.

Although every single primary VPN provider is doing everything in its power to make the networks as simple as possible, there are quite a few technical things that the users need to know about before making their choice. Jayden is not new to technology: in fact, he invested decades of his life into creating some of the critical components that modern-day VPNs use. That makes him one of the most qualified technology advisors in the world. Currently, he is working with several tech companies, helping the founders and the developers find common ground in order to achieve their mutual goals. For Vpnservicepro.com, he defines product requirements, helps to understand the market better, and consults our writers whenever they need a little bit of help.
User Reviews
Be the first to comment.
× Cancel Reply