Industry-leading data encryption, anonymous browsing, flexible pricing, and access to geo-restricted content – that’s what CactusVPN claims to offer. Privacy and anonymity are one of the biggest concerns these days, and this Moldova-based company promises plenty of that. Furthermore, it comes with a highly friendly interface, and the users can pick between various encryption protocols.

We’ll carefully go over the privacy policy to see whether this is, indeed, a private and secure VPN, or not. The bad news is – they have a very modest network: only 25 servers scattered all around the world. Will that will be enough for browsing, streaming, and torrenting? Join us in our detailed CactusVPN review to discuss all of its pros and cons and come up with a verdict.

The company’s HQ is located in Moldova – outside of the Five Eyes jurisdiction. That means CactusVPN isn’t obligated to share any personal info it collects with government agencies. The number of servers is extremely low, though: you’ll get as little as 25 servers in 15 countries at your disposal. This VPN can protect up to five connections simultaneously, which will cover pretty much every single device you own.

The list of supported platforms is impressive. CactusVPN is available for:

Therefore, you’ll find tiny-yet-effective extensions for Firefox and Chrome. They are handy when you only want to encrypt your browser’s traffic as opposed to the entire OS.

What Do You Get With CactusVPN? 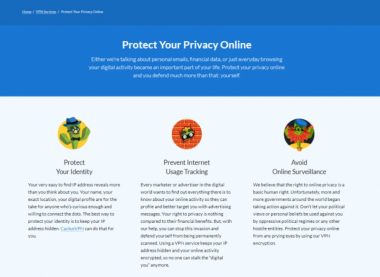 As mentioned, privacy and security are this VPN’s strongest suits, and you’ll get industry-leading protection with it.  Security deserves our highest praise. With six protocols to choose from, you can rest assured no hacker will ever be able to access your raw data. The list of supported encryption protocols includes:

OpenVPN is the most user-friendly protocol; and, it’s open-source, meaning third parties are continually updating it. IKEv2 is known as the most secure protocol, but it’s not available on every single platform. The rest is also quite capable, but not as advanced as these two. It’s important to note that you won’t get the now-standard AES 256-bit encryption.

Instead, CactusVPN offers 128-bit encryption; technically, it’s not as secure, but, according to the experts, it’s still impenetrable. The benefits of using 128- instead of 256-bit include faster connection speeds and a low strain on the device’s CPU. And now let us take a quick look at the available extras.

Kill Switch is arguably the most critical feature for a modern-day VPN. It automatically cuts any active network connections the moment the VPN goes offline. Without a VPN, your traffic won’t be encrypted, and cybercriminals will be able to access it. The Kill Switch prevents that from happening by using a simple, yet very effective method.

DNS leaks protection is another critical feature, and it’s also available with CactusVPN. While Split Tunneling is not supported (it allows the user to hand-pick which apps should be protected by the VPN), the browser extensions are an excellent alternative. Overall, privacy and security are industry-leading and on par with the likes of ExpressVPN, NordVPN, IPVanish, and others. 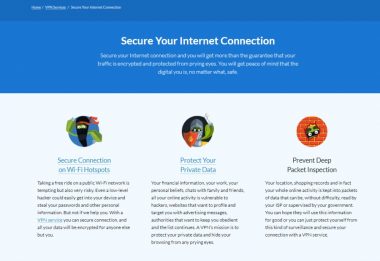 With the HQ located in Moldova (a country that’s not in any surveillance alliance groups), the company doesn’t have to share your sensitive data with the authorities. When pressured, most companies won’t hesitate to give the government(s) access; well, you don’t have to worry about that with this VPN. Besides, it follows the zero-logs policy and doesn’t collect ANY logs, which is a rare thing these days. 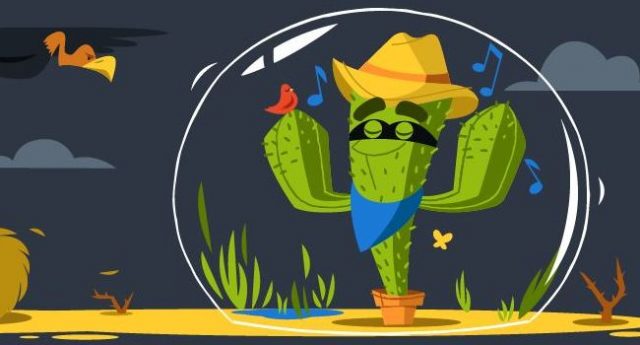 During this CactusVPN review, our experts carefully examined the privacy policy and confirmed that there is, indeed, no logging with this service. In most cases, VPNs claim they don’t log anything, but, in reality, they do collect connection, DNS, and other traffic logs. If you’re a private person and don’t want your ISP or your VPN provider to keep tabs on you, CactusVPN is a fantastic choice.

Again, CactusVPN uses 128-bit AES encryption instead of 256-bit to increase performance. Sadly, that doesn’t entirely make up for the modest server network. Of the 80 VPNs that our experts have tested over the years, this one only managed to land somewhere in the middle. Users looking for top-notch connection speeds and stability might want to reconsider picking Cactus.

On the other hand, performance isn’t terrible, and for browsing and enjoying streaming platforms like Netflix, this is still a good deal. We connected to a few US- and EU-based servers to find the average speeds both on close- and far-range locations. The original download speed was 100 MB; the upload speed – 55 MB.

Let us take a closer look at the results of our tests so that we can have a clear image of what to expect from this VPN. It needs to be said in advance that there wasn’t a dramatic difference between the American and European servers. In both cases, the performance left a lot to be desired. It’s a bit strange, as speed and stability are always dictated by how far from the server the user is.

We weren’t at all impressed by CactusVPN on the US and EU servers. But, download-upload were decent enough and will easily top even the best free products on the market. Our office is located in Europe, and that’s why you’ll see a slightly better performance in the EU. Here are the test results:

Privacy (or, rather, anonymity) is the main reason to even consider buying a VPN in the first place. However, when there are DNS leaks, your connection isn’t safe anymore. We use this term to describe a situation when the user’s traffic doesn’t go through secure VPN servers, but through regular ones instead. We briefly mentioned that CactusVPN comes with DNS leaks protection earlier.

To make sure that there are no leaks/viruses, our team ran a series of tests, and the results were excellent. We used six different tests – CactusVPN performed flawlessly every single time. The same goes for the virus check: sometimes, malware finds its way into the install files of VPN services. Thankfully, that’s not the case with this product.

In the US, the EU, and most of the world, downloading copyrighted material is illegal. It’s not rare for people to go to jail after they download dozens of movies or music albums. With a decent VPN, you get anonymity, meaning nobody will know that you’re torrenting and you won’t get into trouble. Not every single VPN supports P2P traffic, though; so, always check before committing to a particular product.

As for streaming, Netflix and other platforms are available in almost every single country on the planet. However, you won’t be able to access the US catalog unless you’re living in the States. Again, a Virtual Private Network can be used to “trick” the platforms by connecting to a US-based server (and automatically change your IP in the process).

With CactusVPN, torrenting is possible, but only on a couple of selected servers (and, they’re all located in Europe). This means you’ll always have to deal with low connection speeds (because the more users use these servers, the more dramatic the drop in performance will be).

Furthermore, P2P is only available with the most expensive plan (VPN + Smart DNS). With the entry-level plan, you only get access to four VPN servers (either in the US, or the UK), with no torrenting opportunities. And what about streaming – is Netflix easy to “crack” with CactusVPN? The answer is “No” if you’re planning on doing that with the regular VPN.

To unblock any streaming service, you’ll need the Smart DNS package. It’s doing a pretty decent job of accessing geo-restricted content. We were impressed by its capabilities and never had a problem with Hulu, HBO, or Netflix, to name a few. For comparison, the four VPN US servers were never able to get us into Netflix (the UK servers, in turn, failed at unblocking BBC iPlayer).

How Much Does CactusVPN Cost?

There are plans for US/UK VPN, Smart DNS and VPN+Smart DNS

The monthly, 3-month and 1-year plans for the Smart DNS are the same. The following list includes pricing for the VPN+Smart DNS package:

The company also offers a 30-day MBG (Money-Back Guarantee), but it’s not as friendly as with most rivals. You will only be able to get a refund if the VPN fails to connect you to any of its servers. The same is true if the Smart DNS service is malfunctioning. Finally, if even one of the sites from the list of unblocked websites is unavailable to you through Smart DNS, you will get a refund.

It’s important to note that this list is continuously being updated; so, make sure to check back with it every once in a while. Yes, compared to ExpressVPN, NordVPN, and other leading products, this MBG is not nearly as generous. The good news is – the users can always count on a free trial. In fact, there are two different trials: one for the VPN, and one for Smart DNS.

Cactus offers a 24-hour trial for the VPN, and it doesn’t require any credit card info – enter a valid email address, and that’s it. Smart DNS, in turn, is good for a 7-day trial, and like the VPN, you won’t have to share any credit card information. During these trials, you get access to the full versions of both products, without any limits.

Do We Recommend CactusVPN?

Overall, CactusVPN is a highly capable service with a long list of pros. It is affordable, user-friendly, private, and secure; plus, it offers protection for up to five devices and supports most platforms. With Smart DNS, you’ll be able to get access to Netflix, BBC iPlayer, and the rest of the popular streaming services. Finally, the company offers flexible pricing and accepts not only credit cards and online payment, but also Bitcoins/Altcoins.

The downsides include a modest server network, below-average connection speeds, and limited torrenting capabilities. If you’re looking for the fastest VPN on the market, go with ExpressVPN or CyberGhost. NordVPN, in turn, has one of the most impressive server networks (5000+). Still, for watching your favorite shows on Netflix, protecting your anonymity and securing both desktop and mobile devices, CactusVPN is a decent pick.

Samantha is one of the best professionals in the field today, and she uses her online expertise to help international developers better understand the current needs of the users. Apart from working for our website and sharing her expert predictions, she's also busy writing a book. Furthermore, Knight is a welcome guest in many international forums. We're lucky to have her as our partner. She helps us make this website better and to always give the readers exactly what they need. Security is expensive, but you can't go online without it. Thanks to people like Samantha, users from all around the world save significant amounts of money by choosing VPN packages that are equally capable and affordable.
User Reviews
Be the first to comment.
× Cancel Reply