Super Bowl LIII is set to arrive on the 3rd of February, 2019. The fans will get to see the 2-time AFC defending champ, NEP (New England Patriots), compete with the NFC champ, LAR (Los Angeles Rams). In this game, the world will learn the name of the champion of the NFL for the 2018 season. The event will take place in Atlanta, Georgia, at the beautiful Mercedes-Benz Stadium.

If you’re a long-time Super Bowl fan, then you already know about the annoying blackouts. Thanks to the technological process, viewers can easily unblock access to Super Bowl streaming from any corner of the planet by using a VPN. We have a list of providers that will allow you to enjoy the game without any restrictions.

In the States, CBS will be the official broadcaster (by the way, this will be the 20th Super Bowl broadcast on that channel). Plus, it was confirmed that ESPN Deportes will air the broadcast in Spanish, just like the last time on CBS. In the UK, the game will be aired by Sky Sports and BBC Sport. CTV, CTV2, and TSN will bring the event to Canada. The Australian fans can cheer for their favorite team on 7 Network; the French – on TF1.

How to Watch Super Bowl with a VPN? 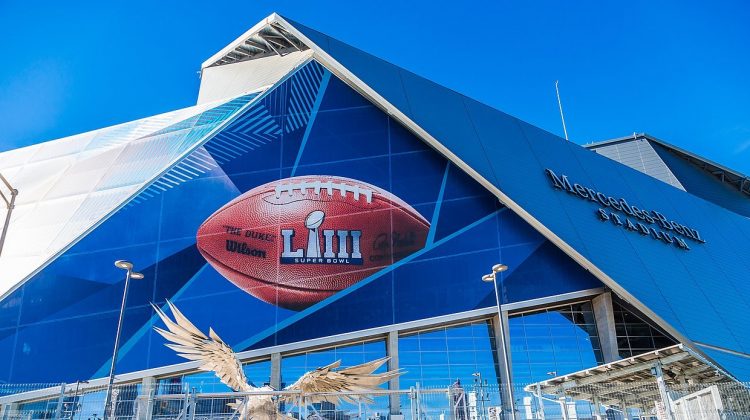 Unless you’re from a country where the event will be aired for free on national television, using a VPN will be your best strategy. Don’t worry: there’s nothing hard about it. All you’ll have to do is pick one of the services from the following list, pick a server in US or one of the above-mentioned European countries, and enjoy the game!

With almost 5.3K servers at your disposal, industry-leading security, and decent connection speeds, NordVPN is an excellent choice for this task. And while the monthly plan is expensive ($11.95), the company offers a lovely 3-year plan for just $2.99 a month. If you’re planning on watching the Super Bowl every single year and don’t want regional blackouts to ruin the fun for you, go with this plan.

Furthermore, with this VPN, you can take advantage of a 7-day free trial. It allows any user across the globe to test it for a whole week, 100% free of charge. That will be more than enough to check out the game.

PureVPN charges less for the monthly subscription ($10.95), so it may be a good choice for digital nomads who prefer to head to the south in winter months, and still want to follow major sporting events. There’s also a 1-year plan that costs $3.33 a month ($39.96 once you subscribe). As for the free trial, it only lasts for three days and will cost you money: for $2.5, you’ll get access to the full version of the service. All the options will allow you to enjoy the 53rd Super Bowl game.

Compared to the previous service, PureVPN doesn’t have nearly as many servers (only a little more than 2K), and speed is not that great. Still, it allows PureVPN to remain one of the market leaders. It performs well enough to let you enjoy buffering-free streaming.

This is the fastest and most stable VPN on the market right now. Sadly, it doesn’t offer a free trial, but there’s a 30-day MBG (Money-Back Guarantee). With it, you can cancel your subscription at any time during those 30 days and get a refund. If you want to enjoy the game, we recommend using ExpressVPN.